In a 5 quart saucepan, melt 1/2 tablespoon butter over medium heat. Add fresh breadcrumbs and a pinch each of coarse salt and ground pepper. Cook, tossing, until golden brown, 2 to 3 minutes. Set aside; wipe pan with a paper towel. Slice Swiss chard crosswise 3/4 inch thick, keeping stems separate from greens. In pan, melt 2 tablespoons butter over medium-high. Cook stems, stirring, until tender, 4 to 6 minutes. Add greens; cover and cook over medium-low until wilted, 5 minutes. Uncover; cook, stirring over medium-high until pan is dry, 6 to 8 minutes. Season with salt and pepper; add a pinch of sugar, if desired. Top with breadcrumbs.

Separate the stems of the chard from the leaves. Cut the leaves into thin strips and set aside. Thinly slice the stems. Heat the olive oil in a large skillet or pot over medium heat. Stir in the sliced garlic, red pepper flakes, and chard stems, and cook for 3 minutes until the flavor of the garlic mellows and the stems begin to soften. Stir in the shredded chard leaves, cover, and cook 5 minutes over medium-low heat. Stir, recover, and continue cooking until the chard is tender. Toss with lemon juice to serve.

Coat a large saute pan lightly with olive oil and add the diced bacon, garlic, and crushed red pepper. Bring the pan to medium-high heat. When the garlic has turned a lovely golden brown, re move from the pan and discard. At this point the bacon should start to become brown and crispy. Add the Swiss chard stems and the stock and cook until the stock has mostly evaporated. Add the Swiss chard leaves and saute until they are wilted. Season with salt. 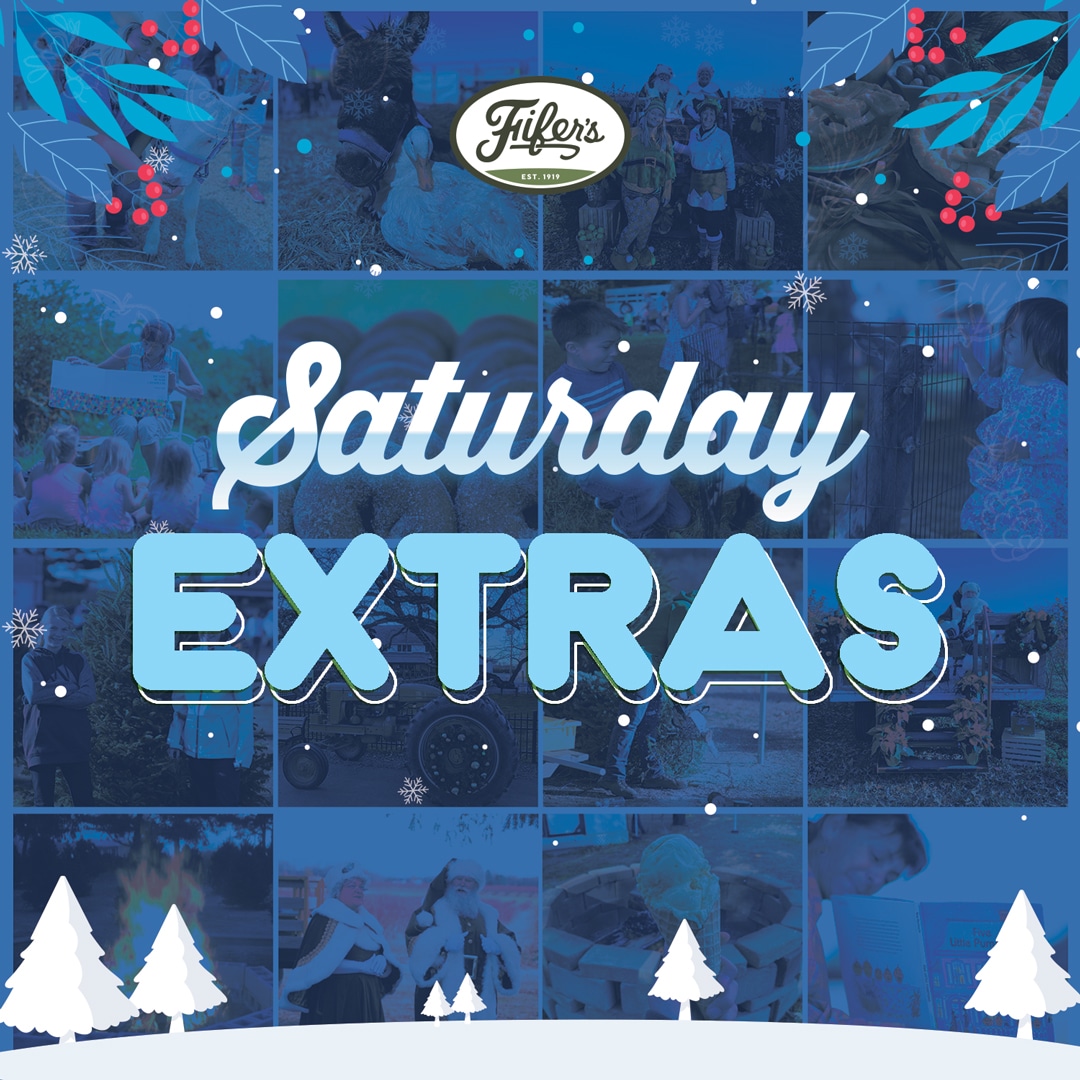 The special guests each Saturday could include the some of the following: farm animal exhibits, horseback rides, face painting, Miss Jackie performances, bonfire, U-Play area and more.
‘Saturday Extras’ will be announced every Wednesday on our Facebook page along with the activities individual times. 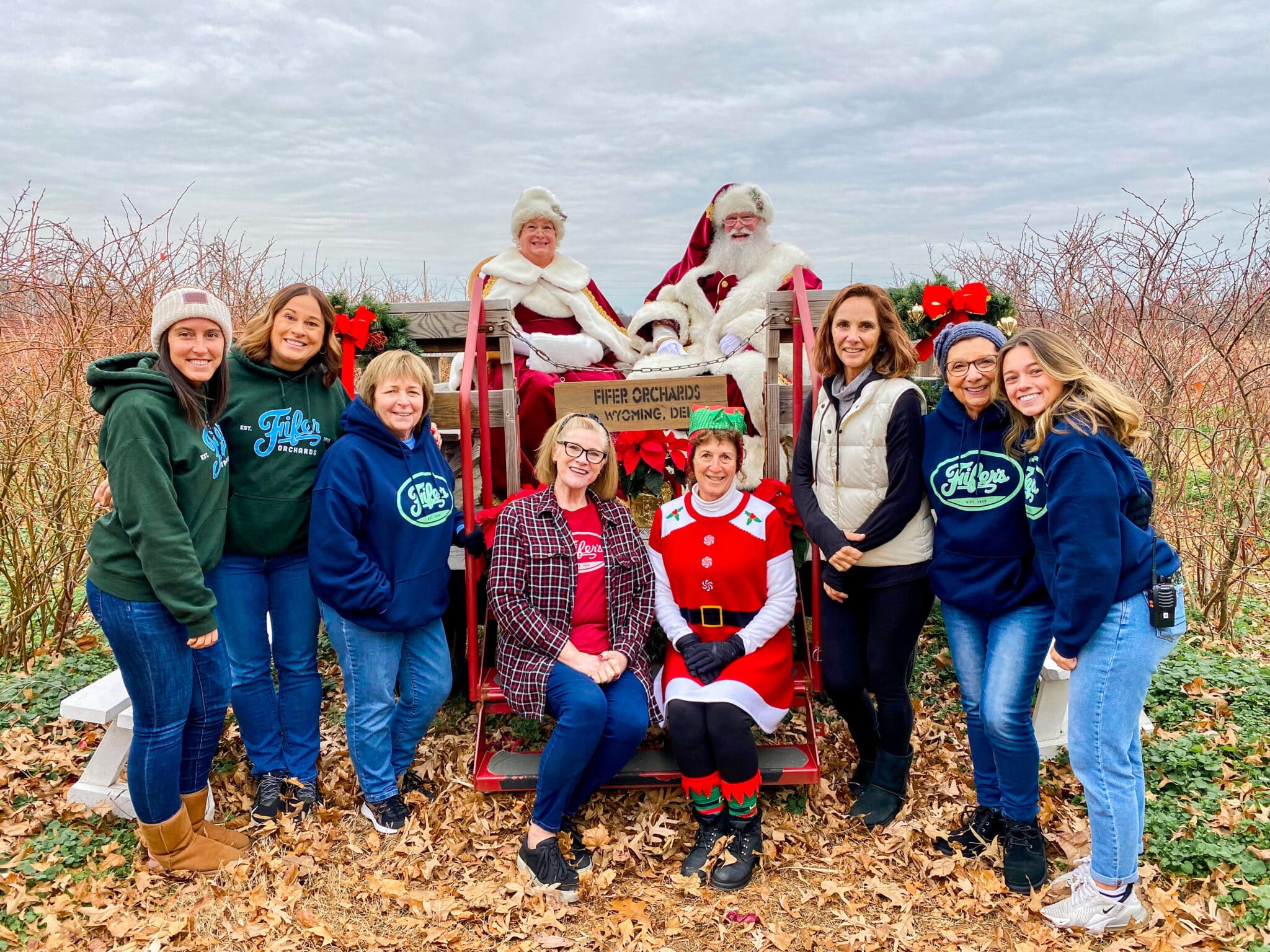 Donuts with Santa
HOW IT WORKS:
Santa & Mrs. Claus will visit the farm on four magical Saturdays!
Nov 26 – Dec 3 – Dec 10 – Dec 17
Santa & Mrs. Claus will arrive on a Fifer tractor & wagon to visit with our time-ticketed guests from noon-4pm. All guests age 3+ must have a ticket to attend the event. Guests under age 3 are free and do not need a ticket. Anyone going through the line to take photos (parents, grandparents, friends, etc.) will all need tickets to go through the line. Just $4.95 per person!

TICKET PRICE INCLUDES:
1 apple cider donut per person
An opportunity to get photos with Santa & Mrs. Claus. Our friendly Fifer staff will be available to assist you with family photos. Just bring your own camera.

IMPORTANT:
Timeslots sell out quickly.
This event is entirely outdoors and will be rain or shine. Please be prepared to dress accordingly. No refunds.
Fifer’s is a non-smoking campus.
Pets are not permitted on the farm due to USDA and Food Safety regulations.
Fifer’s Farm Store & Christmas tree lot will also be open. Shop for unique gifts on the farm from 9am-6pm.
Fifer’s Farm Kitchen will also be open with lunch options and sweet treats. 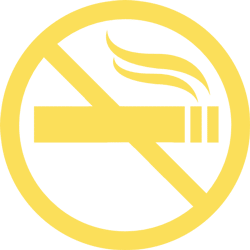 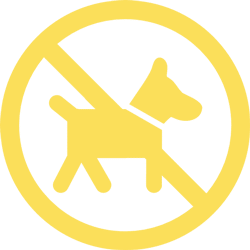